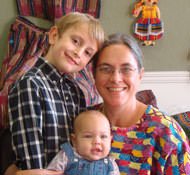 AN ENLIGHTENED VIEW OF RELIGION

When I came to Nacoochee Presbyterian, it seemed familiar because it had the same feeling as the small community church I had attended as a child in central Florida. But I also liked the fact that Jerry Brinegar, the pastor at the time, encouraged the church’s activism in civil rights, peacemaking and environmental issues, and asked for my support. Later I started helping in the nursery so parents could attend services.

When my own children grew older, I realized how the church offered them an enlightened view of religion. What I wanted for them was a community with an understanding that we’re all part of the same family, even though we have differences. That spirit is what has kept me here. We have folks who are liberal and folks who are conservative and folks like me who don’t want to be too defined. Nevertheless, we all believe that Jesus and his teachings are ‘spot on’ in terms of loving each other and not letting our differences get in the way.

NOTE: Joanne wrote, recorded and frequently performs a song called “Seeds of Love”, which she believes captures the spirit of Nacoochee Presbyterian.

A service in the style of Taizé will be held at Nacoochee Presbyterian this coming Wednesday, January 19th. Mary Raymer will provide a beautiful harp prelude beginning at 5:30 pm; the service itself will begin at 6 pm. All … END_OF_DOCUMENT_TOKEN_TO_BE_REPLACED

Our 10:00 am worship service is shared each Sunday via a live-streamed video. You can view the service on our YouTube channel in real time beginning at 10:00 am Eastern time, or you may watch a recording at a later time. To … END_OF_DOCUMENT_TOKEN_TO_BE_REPLACED

Worship services are held each Sunday at 10:00 am. Worship service videos may be viewed at the Nacoochee Presbyterian Church YouTube channel.